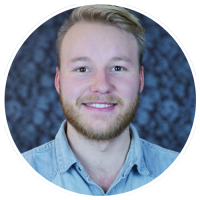 Have you ever felt that you know how to do something, but yet can’t seem to do it?

Marco Geißmann from Germany had that experience with health. He knew what he should be eating more of, and what to eat less of, but the pizza and chocolate was too tempting.

This is how he turned it around.

How were things before WildFit?

I started with raw food about 15 years ago, and tried to get superfood in Germany. At that time there were no superfood products available.

I lived on a 100% raw food diet for 3 years, but then I began my education and got a regular job, and fell back to my old eating patterns, with pizza and junk food. This continued for nearly 12 long years.

I felt that I had all the knowledge about what to eat, but it felt like I had a demon inside that said: “eat that junk food!”. I didn’t have the willpower to follow through.

I would typically come home after work, lay down on the sofa, and then maybe order a pizza or eat some chocolate.

About four years ago I became a father for the first time. I felt like “I have to do something. I need to show my son what healthy food is”, and I did. The first year he ate no sugar, only fruits and vegetables.

But when he wasn’t around, I would go and eat chocolate and pizza. When he became older, he saw me eat a pizza, and he said “Why are you eating pizza? I want some too.”

This made me feel so shameful.

When my second son was born I decided that I really wanted to make a change, both for myself and my sons.

I heard about WildFit through a friend of mine. I did some research, and I liked what I saw. I signed up, and it’s one of my best decisions I’ve ever made.

Do you remember the exact moment when you felt that enough is enough and you needed to change?

It came with the birth of my second child. I didn’t want my sons to make the same mistakes I had made. I knew that they were learning from watching what I was doing and I didn’t want them to be trapped in bad food habits. I was always tired. I had many ideas of things I wanted to do, but I didn’t have the energy to do any of it.

What did you observe about yourself throughout your Challenge?

I had never thought about observing my food pattern and how food affected my body. That was probably the most powerful thing for me during the Challenge.

Did any beliefs or habits from your childhood (that you were unaware of) that came up during the Challenge?

Yes. In my childhood, the funnest thing I did was to go out and eat pizza. We would gather the little money we had and buy pizza. It was so exciting, and I associated that excitement to pizza. Pizza = fun.

When I bought pizza as an adult, I often bought too much. Since I knew it was unhealthy, I didn’t want to save any of it for the next day. So I would eat it all up in the same night, and I would go to bed so full. The following day it felt like a had been drinking too many beers the night before. I felt awful.

How did you feel at the end of the Challenge?

I really liked the program because we had videos every week that held me accountable. Also, I was a little bit worried that I would go back to my old eating habits after the Challenge.

How have things been since the Challenge?

My life has changed in so many ways.

I have more energy,  my creativity is strong, my self-esteem is high, and my sleep pattern has changed. I sleep fewer hours, but I feel so refreshed when I wake up, that I don’t want to go to bed again.

I’m a chi gong and yoga teacher. I feel a real difference in energy and muscular power. My muscles are compact, and I’m much stronger than before. I didn’t change my yoga routine during the challenge, but I’ve noticed a big significant improvement in my flexibility.

Another thing is that I have grown a huge community and friendships from all over the world through WildFit.

With 15 years of experience in this area, WildFit is the first lifestyle program that made sense to me. I love telling others about WildFit. I don’t have to talk about a vegan diet or a vegetarian diet. WildFit just makes sense, and I can speak about it enthusiastically.

Any more experiences with WildFit you want to share?

My wife struggled with my change in the beginning.

She was actually relieved when the Challenge was over because she thought I would go back to the old way of living. But then I explained that this is a lifestyle and I don’t want to go back to my old habits.

Two weeks after the Challenge she was frustrated. Then she turned around and asked if I could tell her a little more about WildFit. She wanted to try it as well!

I didn’t want to push her, and let her do her own thing.

Then at breakfast my oldest son was eating his usual breakfast with bread. He was observing me and what I was eating.

He started to ask questions about why I eat all these vegetables. I explained that it’s good for me and gave me more energy. Then he asked if he could have vegetables too. Now he usually eats what I eat, because he wants to eat what dad eats.

I don’t need to say that milk is bad or junk food is terrible because he already knows. He has adopted his own lifestyle.

I never asked them to change their diet. I prepare their food, and I make my food. If they ask for some of my food, I say “yes of course.”

Also, I did the Challenge during my parental relief with my second son.

All my colleagues would say “What happened to you?”, “What has changed? You look so strong!”. Everybody asks me: “how did you do it?”.

In the past, when I tried to establish myself as a raw food/nutritional coach, no one asked for advice, because I was fat and didn’t look healthy. That has changed now!

We are so proud to say that Marco is now taking his WildFit Coaching Certification. He has an energy and determination that’s hard to find, and we’re thrilled he will be among our WildFit certified coaches.

We don’t need to wish him luck, because we know he doesn’t need it!